Kristina brought this article to my attention -- and then I realized it was the study I participated in at FINA Worlds!

DARA TORRES, the 41-year-old Olympic swimmer with the impossibly chiseled abs who collected three silver medals in Beijing, has proved at the elite level that getting older doesn’t mean getting slower in the water. But put her aside for now.

Skip to next paragraph 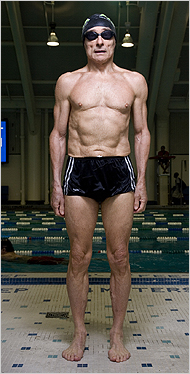 Photographs by Filip Kwiatkowski for The New York Times

FULL SPEED AHEAD Stanley Shechter, 75, has shaved time in the 100-yard freestyle.

Torres Is Getting Older, but Swimming Faster (November 18, 2007)

Researchers at the Counsilman Center for the Science of Swimming at Indiana University found that the population of Masters swimmers (made up of 42,500 members ages 18 to 100-plus) has gotten faster over the last 20 years in age groups from 25 to 55, said Joel Stager, the center’s director.

Why is that? They are applying better skills.

Chief among the reasons for the speediness, say coaches, researchers and swimmers themselves, are improved stroke mechanics and training methods emphasizing intensity over distance. This is good news for those who like to race, and for those taking to the water for fitness at any age.

As they age, people lose muscle mass and cardiovascular capacity, which declines by 1 to 1.5 percent annually. But for regular exercisers, the rate of decline is slower, researchers say.

“Before, it was thought that athletes peak at 25,” said Scott Trappe, the director of the Human Performance Laboratory at Ball State University. But now the paradigm is shifting. “People are paying attention to their own fitness and nutrition.”

Swimmers can compensate for the body’s decline mostly because the water rewards those who are more technically proficient, and because the sport is non-weight-bearing and enables prolonged participation. “People can and do get faster, despite the fact that they may be 10, 20 years older than when they first started,” Dr. Stager said.

Here are five competitive Masters swimmers, ages 40 and well beyond, who help prove that.

Kristin Gary swam at Duke University in the late 1980s but tired of the long workouts. Now, Ms. Gary, 40, has recaptured the joy by swimming for the Red Tide, a Masters swim team in New York.

Her coach, Eric Mitchell, attributes her improvement in part to her ability to execute the dolphin kick, an underwater kick that was not allowed when she was in college. Swimmers can now use the kick up to 15 yards underwater in competition, on turns and after dives off the blocks. They gain power from the legs moving in concert with the body, which undulates like a dolphin. (Michael Phelps and Natalie Coughlin are experts at it.)

Fitness swimmers don’t need the dolphin kick, though it’s fun to try a trick from an Olympian’s playbook. Those who want to be faster may find it useful, but it depends on how skilled a person is, said Mr. Mitchell, who makes teaching it a priority and said it requires core strength and flexibility.

Stanley Shechter, 75, is still trying to master the dolphin kick, finding an alternating-leg flutter kick more effective. But he discovered that hand positioning after diving into the water can help shave time. He practiced at Asphalt Green on the Upper East Side of Manhattan (where he belongs to the Masters team), placing one hand over the other, fingers together to eliminate drag, the way Patrick Cantrell, his coach, instructed.

Mr. Shechter straightened his arms, keeping them close to his ears, and held the pose underwater. “It’s tough to hold your arms for that long,” he said. “But it works.”

He attributes his improvement to practicing five days a week, mindful not to go too far. That approach, too, represents training filtered down from many elite programs. Coaches and swimmers have discovered that less is sometimes more, especially in events no longer than 100 yards. In 2003, Mr. Shechter swam the 100-meter freestyle at the Masters national meet in 1:23.46. In May, he won the 75- to 79-year-old division at the nationals in the 100-yard freestyle in 1:12.67.

When improving performance, the psychological lift cannot be ignored. Tracy Grilli, 51, believes setting goals as a team makes a marked difference. Ms. Grilli is the administrator at the United States Masters Swimming national office in Londonderry, N.H., and belongs to a local team. But her Mighty Mermaids team is made up of friends averaging age 50 from New Jersey, California and Virginia.

To prepare for an open-water swim in July, Ms. Grilli charted their individual yardage online, for a virtual swim up the Mississippi River. “It is the people I swim with that make the difference,” she said. “I could swim alone and say, ‘I’m tired.’ That’s not going to make me swim any faster.”

Turning Back the Clock

Not every swimmer over 40 can set records. For many, being fit is as much a goal as being fast.

Andy Weiss has thick white hair and a chest scar from bypass surgery but looks younger than his 87 years. “A lot of people call me a freak,” said Mr. Weiss, who swims an hour three days a week at Asphalt Green, where he is a Masters team member. “After swimming I feel wonderful.”

He won two silver medals and a gold medal at the May nationals, but says he enjoys the water’s revitalizing power. His tips for improving?

“Don’t smoke, get a good coach, get enough sleep, a full eight hours,” he said, before adding with a laugh: “And don’t get older.”

Aging has not hampered Marie Kelleher. She swims four days a week at a Y.M.C.A. in Richmond, Va., logging a half-mile each day, alternating strokes for 30 minutes of laps. At 95, she won her age group at a regional Masters meet in February, with a time of 3:02.75 in the 100-yard freestyle. “I started swimming because I wanted to keep in shape,” she said. “As long as I can drive myself to the pool, I am going to keep swimming.”

She was impressed, if not inspired, by Ms. Torres. “How old is she again?” Ms. Kelleher asked.